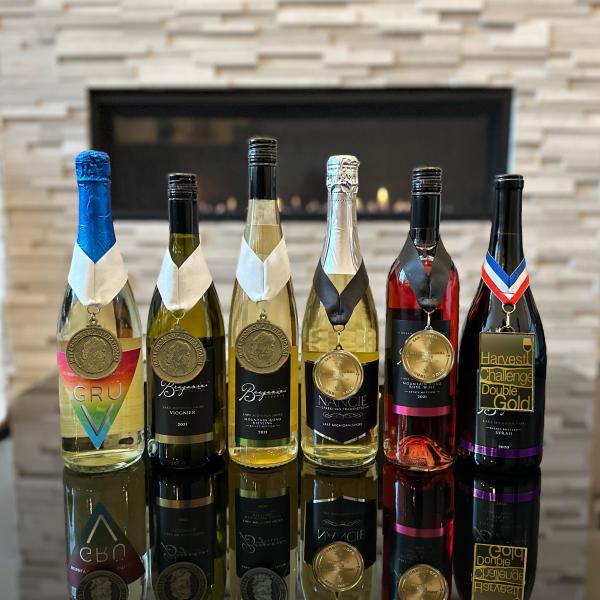 (PAW PAW, Mich) — As 2022 comes to a close, St. Julian Winery has announced the addition of 48 medals from three noted international competitions, effectively reinforcing its designation as Michigan’s most award-winning winery. Highlights are listed below, and the full list of medals from these competitions linked here:

Noted as the largest and most influential international wine competition in America, the San Francisco International Wine Competition has been setting the standard for professional wine judging since its debut in 1980. The competition maintains the highest level of integrity with a blind-tasting system performed by a highly experienced panel of internationally acclaimed wine experts. A medal from this competition has been established as a reliable indication of wine excellence, and wines recognized as medal-worthy by these judges are universally understood to be among the very best.

The 23rd Annual Jefferson Cup Invitational Wine Competition was held November 17-18 in Mission, Kansas and from 575 wines entered, just 41 coveted trophies were awarded (from 10 states). Michigan overall brought home a collective eight Jefferson Cups – with two for St. Julian for its Grü V (in the Sparkling Wine category) and 2021 Braganini Reserve Viognier (in the White Vinifera category). St. Julian also was awarded one Double Gold, one Gold, 12 Silver and 2 Bronze medals for other wines entered.

Considered by many to be the “Olympics” of wine competitions, the Jefferson Cup Invitational was founded in 1999 in honor of Thomas Jefferson, who not only fathered the U.S. Constitution, but helped champion the international concept of human rights and was a seminal figure in America’s culture, culinary (including wine) and agricultural history. This is the only competition that recognizes the “best of the best” wines from all of America’s wine regions, with entries culled from tastings and competitions around the country (vs being open to any winery willing to submit and pay an entrance fee).

The Harvest Challenge, owned and operated by Wine Competition Management & Productions, is the only competition to judge wines by terroir or American Viticultural Area (AVA). As of August 2022, there are 267 recognized AVAs in 34 states – several of which are shared by two or more states. Michigan is home to five federally-recognized AVAs:

In order for a winery to include the AVA on the label, 85% of the grapes in the wine must come from that region.

St. Julian is Michigan’s largest and longest-operating winery and has been family-owned since its founding in 1921. In addition to the winery in downtown Paw Paw where they produce hundreds of award-winning wines, sparkling juices, spirits and hard cider, St. Julian also offers tasting rooms in Dundee, Frankenmuth, Rockford, Troy and Union Pier and distributes to thousands of retail partners throughout the Midwest.