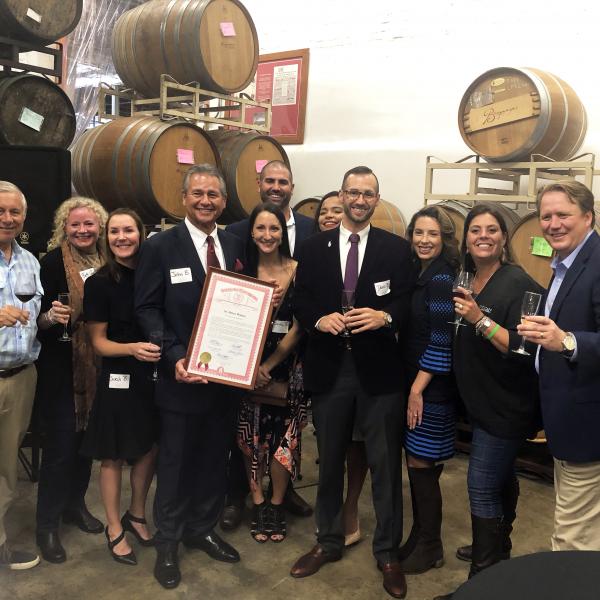 (PAW PAW, MI) — St. Julian Winery — Michigan’s longest operating and most award-winning winery – recently celebrated its Centennial with a historic gathering in Paw Paw, where it has produced wines since 1936. Italian-born Mariano Meconi founded the company in Canada in 1921 as the Border City Wine Cellars (later known as Meconi Wine Company), before moving to Detroit and ultimately to the heart of West Michigan’s Lake Michigan Shore AVA (American Viticultural Region), where it first operated under the moniker of The Italian Wine Company. It has been known as St. Julian Winery since 1941.

“We have survived Prohibition, wars, The Great Depression, The Great Recession, fires, family tragedies, a pandemic, and countless other challenges over our 100-year timeline,” says Dario Braganini, Outstate Sales Director  “We are blessed to have not only endured but to have prospered and grown throughout the years, cultivating our beverage portfolio to include wine, cider and spirits, as well as expanding our agricultural footprint here in the “fruit belt” region of Michigan. This year is a celebration of St. Julian as long-standing family company focused not only on today but on our future as an industry leader.”

To celebrate its landmark anniversary, St. Julian’s winemakers created a Centennial Series: six 2019 Cabernet Sauvignons, all of which hail from Mountain Road Estate Vineyard. The first five in the series were aged 14 months in French oak barrels from different cooperages, yielding delightfully different results, and the sixth wine is a harmonious blend of the first five.

These limited-edition wines were released exclusively at St. Julian’s Centennial Series Release Party held this fall in St. Julian’s newly opened barrel room. Guests were able to taste each of the wines with a perfectly paired appetizer as well as enjoy other limited and rare wines while mingling with the Braganini Family, the winemakers, Wine Club members and area legislators.

U.S. Congressmen Fred Upton, Michigan Senator Aric Nesbitt and Michigan Representative Beth Griffin were in attendance and presented President John Braganini with an exclusive Centennial award honoring the milestone. “It’s an honor to be here,” said Nesbitt. “Not many businesses make it five years, let alone 10 years, let alone 100 years, and so the state of Michigan would like to pay you a tribute for the last 100 years here at St. Julian.”

Prior to the party, winemakers Nancie Oxley and Kyle Totzke, held a special educational seminar to teach how barrels are like a winemaker’s “spice rack” as well as how to taste the differences between barrel styles. St. Julian is also looking ahead to the next 100 years of wine, cider, and spirit making in Michigan.

About St. Julian: For 100 years, the iconic St. Julian Winery & Distillery has been making wine, cider, and spirits in a range of styles to meet every customer’s taste. Now helmed by third and fourth generation Braganini family members, the company is committed to making authentic wine from the Lake Michigan Shore. As the largest and best-known winery in Michigan, St. Julian has led the local industry in both innovation and quality from the very beginning. From its wildly popular Sweet Revenge and Envy wines to the Braganini Family Reserve Wines, to its growing line of distilled spirits, ciders and sparkling juices, St. Julian has something for everyone. St. Julian, which is distributed in five states outside of Michigan, currently operates six tasting rooms within the state – Paw Paw, Dundee, Frankenmuth, Troy, Rockford, and Union Pier.