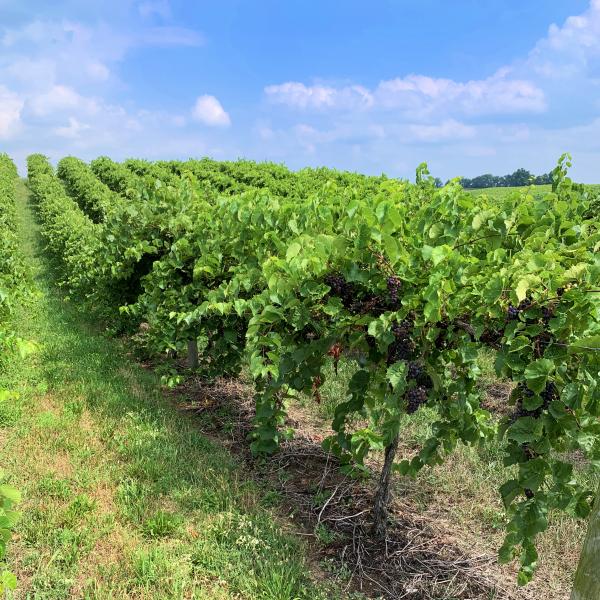 (PAW PAW, Mich) — As Michigan’s largest and longest operating winery, St. Julian Winery in Paw Paw is located in the heart of the state’s “fruit belt” region. It was this rich soil and ripe countryside which prompted Mariano Meconi to move his winery from Detroit (after relocating it from Canada post-prohibition) to Van Buren County in 1936.

The first vineyards were planted here in the 1860s, providing fruit to a handful of early wineries which have since been lost to time, as well as a Welch’s grape juice factory – established in 1919. These rolling hillsides located east of the Lake Michigan shoreline are impacted by “lake effect” conditions which provide an ideal growing climate for grapes while also creating a diverse terroir flavor profile.

“Proudly, almost all of our wines, ciders and spirits are crafted with Michigan grown agricultural products,” notes Nancie Oxley, Vice President - Winemaking at St. Julian. It is easy to determine just where the fruit in any specific wine comes from. If the label reads “Lake Michigan Shore” then at least 85% of the fruit in that specific wine is sourced from growers within the AVA. Labels that read “Michigan” mean that at least 75% of the fruit was procured from around the state, but not specifically from one AVA. Wines made with 100% of grapes from St. Julian’s own Mountain Road Vineyard are identified as “Estate” vintages.

Today, St. Julian proudly partners with about 20 Michigan grape growers who harvest a diverse gamut of fruit from commonly known native, vinifera (“Old World” European grapes) and French-American varietals like Cabernet (Franc and Sauvignon), Chardonnay, Pinot (Noir and Gris), Riesling and Merlot to more unique varietals such as Barbera, LaCrescent, Sangiovese and Rougeon (which is blended with Marquette and Chambourcin in St. Julian’s 100th anniversary wine, Cento), among many others.

“We had a grower approach us about growing Albariño. To our knowledge, no other grower in Michigan had a significant planting of this varietal. It is usually planted in a warmer region, so it wasn’t at the top of our list. But we were delighted at how well is does in this region and several other growers have also now planted it,” Nancie notes. “This same grower had a few Tempranillo vines and asked if we would be interested in a larger planting of it. Again, we were quite surprised how well it does, and we absolutely love the wine – both the rosé and red.”

In all, more than 50 varietals are used in varying degrees to create St. Julian’s vast catalog of award-winning wines.

“Michigan is such a young wine region, we have a large number of varietals that we know grow well, but there are so many that we haven’t even tried – if we don’t take the opportunity to plant them, we will never know if they are the right match,” says Nancie. “With several microclimates within one appellation, site selection for each varietal is crucial.”

In addition to being the longest-operating winery, with the most diverse grape varietal and wine portfolio, St. Julian is also recognized as the largest processor of Michigan wine grapes in the state with upwards of 6,000 tons harvested annually. A handful of that fruit – 50 to 60 tons – is grown at St. Julian’s Mountain Road estate vineyard in Coloma. Here, seven vinifera varietals are grown for small premium batch offerings including Pinot Gris, Cabernet Sauvignon, Sauvignon Blanc, Pinot Noir, Riesling, Syrah and newly planted Sangiovese.

“Managing Mountain Road has been one of the most challenging yet rewarding opportunities I have been fortunate enough to be a part of,” says Sarah Braganini, who owns and operates the vineyard with her husband and St. Julian President, John Braganini. “It is challenging in that we are reliant upon Mother Nature to be on her best behavior, which doesn’t always happen. Last year was our first year working with netting to prevent crop losses from birds, deer and other critters.  It made a huge difference in the fruit we took in and is something we will continue to use each year as we get closer to harvest. It is incredibly rewarding to see the fruit from our own vineyard being turned into award winning wines year after year.”

Each year, St. Julian amplifies its “Pure Michigan” presence on a multitude of levels – from grape variety and volume of fruit processed to the number and styles of wines to a growing number of tasting rooms throughout the southern part of the state to increasing out-of-state-distribution and spreading the word about their award-winning products. Every element is meant to tell a story about this family business deeply rooted in the state’s rich agricultural heritage and its commitment to its successful future.

“Carrying on the mission of being a pure Michigan winery, St. Julian continues to be committed to Michigan agriculture,” says Nancie. “We cannot truly build a recognized, world-class wine region by sourcing fruit from outside our state.  Every well-known wine region in the world has built their foundation of quality on the grapes grown in their backyard.  Michigan has several unique microclimates, and we are embracing the fruit grown in many of them, but mainly the Lake Michigan Shore Appellation. From Baroda to Lawton, each region imparts uniqueness on varietals, which can be linked to the terroir of each area, even times down to specific block of fruit from each grower.”

For 100 years, the iconic St. Julian Winery & Distillery has been making wine, cider, and spirits in a range of styles to meet every customer’s taste. Now helmed by third and fourth generation Braganini family members, the company is committed to making authentic wine from the Lake Michigan shore. As the largest and best-known winery in Michigan, St. Julian has led the local industry in both innovation and quality from the very beginning. From its wildly popular Sweet Revenge and Envy wines and the Braganini Family Reserve Wines, to its growing line of distilled spirits, ciders and sparkling juices, St. Julian has something for everyone.