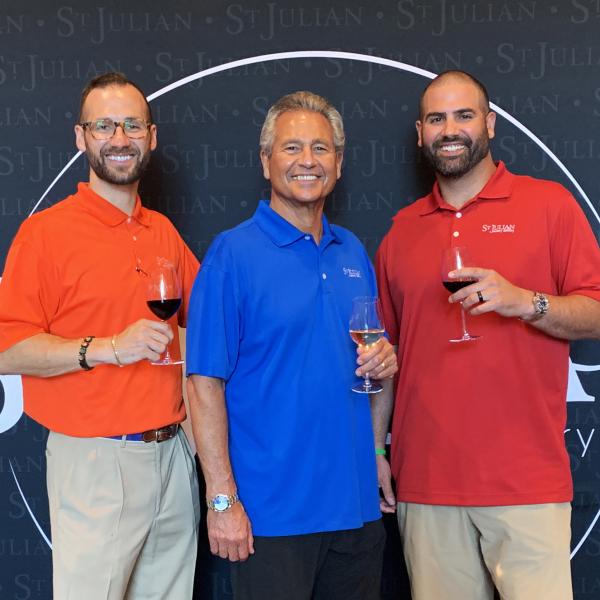 After celebrating its centennial last year, the company has announced that Apollo Braganini II ascended to the role of President on August 1, 2022. He succeeds his father, John, who stepped into leadership in 2016 after his brother, David, passed away unexpectedly. Apollo, named after his paternal grandfather, is the sixth family member to head the company. Along with his brother, Dario, he will pilot this iconic company into its second century.

Mariano Meconi founded the company in Canada as the Border City Wine Cellars (later named Meconi Wine Company) in 1921. As soon as the 18th Amendment was ratified and prohibition ended, Meconi moved his operations to Detroit and ultimately to Paw Paw in 1936 (first known as The Italian Wine Company before being christened St. Julian Winery – after the patron saint of Meconi’s birth village – in 1941).

Meconi and his wife, Avelia, had three children – Robert, Julia (along with her husband, Apollo “Paul” Braganini) and Eugene – each who contributed to the winery. Inspired by his grandfather, mother and father, David Braganini joined the family business in 1973, serving until his death in 2016. At that point, John stepped into the leadership role and soon brought his sons, Apollo and Dario, into the fold. John will remain on as Board Chairman and as a corporate advisor.

“Working with my sons was always something I wanted to do and having the opportunity to do so here at St. Julian has been a gift,” says the elder Braganini, who, along with his wife, Sarah, and his branch of the Braganini family, has helped usher in a new and exciting era for the company.

“I was always fascinated with the winery, even as a child,” says Apollo. “In 2018, I was presented the opportunity to join the family business and was tasked with revitalizing the Wholesale and Distribution channels. Since then, I have had the pleasure of learning this very complex business while also enjoying tremendous growth across all sales avenues.”

Over the past five years, Apollo and Dario have focused their energies on developing the St. Julian’s wholesale business and have enjoyed a significant increase in sales throughout the Midwest. As Outstate Wholesale Director, Dario has marshalled outstate sales with continued success from his headquarters in Indianapolis.

Under Apollo’s direction, St. Julian will continue to bring the highest quality products – wine, cider and spirits – to consumers while remaining focused on company’s commitment to Michigan agriculture and advancements in technology and production innovation.

“It is a privilege to work with such an outstanding group of people every day and the team at St. Julian truly sets themselves apart from any I have worked with before,” Apollo says. “I am also extremely honored for the opportunity to help lead St. Julian through its next chapter alongside my brother and business partner. We are excited to continue our family’s passion and legacy. It is a blessing to be able to work with my family every day, and hopefully – one day – my children will stand beside me at this truly amazing company.”

St. Julian, Michigan’s largest and longest-operating winery, has been family-owned since its founding in 1921. In addition to the winery in downtown Paw Paw where they produce award-winning wines, sparkling juices, spirits and hard cider, St. Julian operates tasting rooms in Dundee, Frankenmuth, Rockford, Troy and Union Pier.