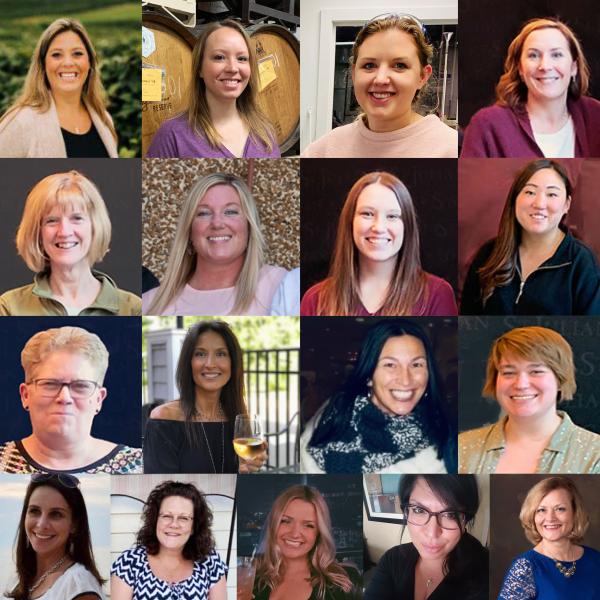 A Toast to the Women of St. Julian

(PAW PAW, Mich)—Women have always been a strong part of the story of St. Julian Winery, starting with Avelia – the wife of founder Mariano Meconi and mother of four children, including Julia Meconi who was born in 1926 just five years after the then Border City Wine Cellars opened in Canada.

Julia grew up in the wine industry – first in Detroit and later in Paw Paw, where the company flourished not far from the Lake Michigan shoreline. She and her brothers, Robert and Eugene, eventually became the second of what is now four generations to work within the award-winning winery. In 1947, Julia married Apollo “Paul” Braganini who himself made his way up the ranks of Michigan’s largest and longest-operating winery.

Sadly, Julia passed away in 1971 after a lengthy battle with breast cancer at the young age of 45. Her legacy, however, remains. In 2010, St. Julian released Simply Pink (a semi-dry blush wine) – dedicated to Julia’s memory – with a donation from every bottle sold benefitting the National Breast Cancer Foundation. Later that year, it was named “Rosé of the Year” at the Indy International Wine Competition.

“Julia Meconi Braganini was easily the most influential person in my life,” notes son and winery President, John Braganini. “Her strength, intuition and discipline crafted my character and continues to guide me today. Because of her courage and fortitude, by design, I have chosen to surround myself with strong, capable women throughout my business career. At St. Julian, the hand that rocks the cradle is apparent in everything we do!”

Without question both Avelia and Julia laid the groundwork for the women of St. Julian who reign today, from the tasting rooms to the office to the winery itself. These women boast over 100 collective years of experience with the centennial company.

When Nancie (Corum) Oxley was hired as a lab manager and enologist at St. Julian in 2002, she was on a groundbreaking path. The next year, she made history by being named the first professional commercial female winemaker in Michigan. In 2008, she was named Associate Winemaker and promoted to Head Winemaker in 2010. She made her way to Vice President of Winemaking in 2017 with nearly 20 years of experience. Her high energy and enthusiasm for winemaking is evident through the winery’s diverse wine, cider and spirit portfolio.

Kristin Kohane joined the St. Julian Team nearly two years ago as an Enologist (someone who studies the art of winemaking), having come from another local winery where she served as Tasting Room Manager and Assistant Winemaker. She runs the chemistry on the wines and decides what needs to be added before they’re finished and ready for bottling. Kristin earned her bachelor’s degree in mathematics (with a music minor) from Aquinas College in Grand Rapids. She also has a degree in Wine & Viticulture Technology from Lake Michigan College in Benton Harbor. A former math and science tutor, Kristin worked seven years in accounting before she discovered her interest in working in the wine industry.

As an Enologist, Kayla McQuinn is also responsible for checking the quality and chemistry of all St. Julian wines, from grape to bottle. She graduated from Albion College in May of 2020, receiving a bachelor’s degree in Biology (where she also worked as a teaching assistant and lab technologist for biology and chemistry courses). Last fall, Kayla was a harvest intern at St. Julian and was hired as an Enologist just months later.

After a successful career in financial services management, Sarah Braganini joined her husband, John, in 2018. She took over the management of our Mountain Road Estate vineyard and provides executive analysis and support as St. Julian enters its next century.

Carolyn Gibbs is approaching her one-year anniversary as the Chief Financial Officer for St. Julian. Prior to that, she served as CFO for The McCully Group in Southwest Michigan (2018-2020), the non-profit Dairy Management Inc., (2013-2017) and had 13 years of experience with Kraft Foods. Carolyn has a bachelor’s degree in accountancy from Northern Illinois University and received her CPA license in May 1983 in the State of Illinois.

Jaime Pursley has served as Director of Human Resources and Executive Administrator at St. Julian since June 2008. She has an Associate’s Degree from Kalamazoo Valley Community College and attended Western Michigan University.

Catherine Sturdevant is the Cost Accounting Manager at St. Julian, starting her career in supply chain with a major grocery retailer before moving into finance in the beverage industry. She worked for a brewery in Northeast Pennsylvania before coming to St. Julian, the change allowing her to expand her knowledge of the winery side of the beverage industry. She believes St. Julian has an amazing culture that really encourages growth and collaboration, and she is happy to be part of the team at such an exciting time in the company’s history.

Cindy Jewell has more than 30 years of experience at St. Julian, serving as Sales Administrative Assistant at the Paw Paw facility.

Developing a love of wine through traveling and working with her husband in their restaurant ventures, Cassandra Poné jumped at the opportunity to join St. Julian in 2012. With a degree in English from the University of Michigan, and a teaching certification from Western Michigan University, Cassandra found the perfect career creating opportunities for people connect and learn through wine. As Wine Club Director, she collaborates with the winemaking, marketing and tasting room teams to create new wines, events and experiences for members to enhance their journey with wine. A certified Sommelier and WSET (Wine & Spirits Education Trust) Level 2 Certification holder, Cassandra believes that wine is meant to be fun and approachable, and she enjoys sharing this discovery with her Wine Club members.

After 26 years with Southern Glazer’s Wine & Spirits (SGWS), Rene Szymanski made a change and joined St. Julian Winery in August of 2019. She is State Manager for Ohio, where she develops broad sales plans and objectives to be implemented to a large sales force. She is a charismatic person who has an unrelenting attitude in her sales approach. Rene is resourceful, focused, confident and extremely competitive. “One of the best decisions I ever made was accepting a position with St. Julian. Afterall, there is a lot of truth to the quote ‘when you find a job you enjoy doing you will never have to work a day in your life.’”

Jennifer Bileth is Assistant Manager and Wine Consultant at St. Julian’s Rockford Tasting Room, joining a year-and-a-half ago. With a background in marketing, she has worked for Everly Inc. and Spectacle Creative Media as well as 17 years as a Visual Merchandising Specialist at Meijer. Jennifer has an Associate’s Degree from Montcalm Community College, a Bachelor of Business Administration in Business Management & Marketing from Grand Valley State University and a Master of Business Administration from Davenport University.

Mollie Hill has been with St. Julian for over 10 years and is currently Assistant Manager of the Frankenmuth Tasting Room.

Brooke Szczurek joined the team at the St. Julian Dundee Tasting Room in June 2020. She graduated last year from Central Michigan University with a Bachelor of Applied Arts, majoring in integrative public relations with a minor in event management. While a student, she served as Marketing Director for the Collegiate Panhellenic Council at CMU. She has several notable PR internships in her portfolio including with MurphyEpson in Columbus, Ohio; United Way of Clare and Gladwin Counties; and the Mt. Pleasant Discovery Museum.

Felice Tansley is the Tasting Room Manager for the Frankenmuth store and is the Eastern MI District Manager. She has been with St. Julian for 17 years, starting out as a part-time employee. She has seen the company grow over the years and is excited for what the future holds.

Sherri Waddle Cummings is the Retail Manager of St. Julian’s Union Pier location, one of the busiest tasting rooms in Michigan. She’s been with St. Julian for 10 years and has overseen the expansion of the warehouse and bar areas and showroom renovations. The addition of a beautiful outdoor patio and extended outdoor seating provides a pleasant customer experience enhanced by the entertainment and food trucks she coordinates for the warmer months. She completed the Wine and Spirits Education Trust (WSET) course with Distinction. Sherri has an extensive hospitality background. As the owner of the popular Hannah’s Restaurant in New Buffalo for 23 years, she curated the extensive wine list of over 80 varieties from around the world. Very active in her community, Sherri has helped spearhead the donation distribution of St. Julian’s sanitizer to many organizations during the COVID crisis. She serves as VP of Women in Leadership LaPorte and is past president and a member of Executive & Professional Women’s Association and Friendship Botanical Gardens. She is a Summa Cum Laude graduate of Lee Honors College at Western Michigan University.

For 100 years, the iconic St. Julian Winery & Distillery has been making wine, cider, and spirits in a range of styles to meet every customer’s taste. Now helmed by third and fourth generation Braganini family members, the company is committed to making authentic wine from the Lake Michigan shore. As the largest and best-known winery in Michigan, St. Julian has led the local industry in both innovation and quality from the very beginning. From its wildly popular Red Heron and Blue Heron wines and the Braganini Family Reserve Wines, to its growing line of distilled spirits, ciders and sparkling juices, St. Julian has something for everyone. St. Julian, which is distributed in five states outside of Michigan, currently operates six tasting rooms within the state – Paw Paw, Dundee, Frankenmuth, Troy, Rockford, and Union Pier.