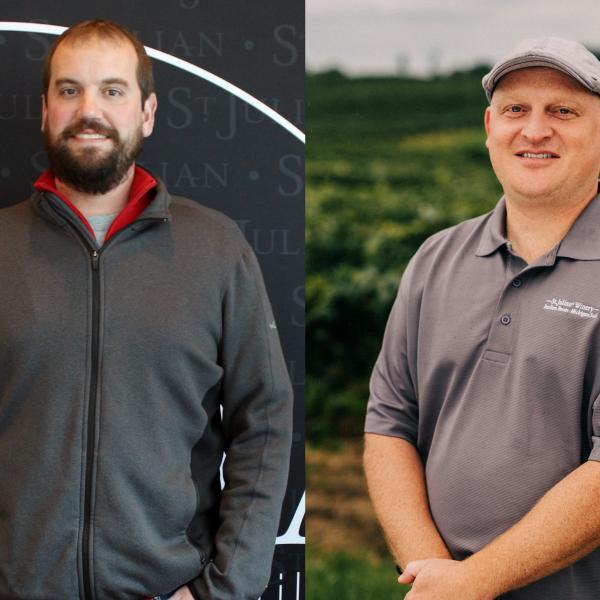 Szakaly was hired as a Regional Retail Manager in February 2017, overseeing the four St. Julian tasting rooms that operated at that time. Since then, two additional locations have opened which fall under Szakaly’s responsibility. He also oversees the Wine Club and online/shipping sales for the company, noting that the St. Julian 2017 Braganini Reserve Cabernet Sauvignon is his all-time favorite wine. A “big sports fan,” Joel and his wife enjoy watching their two children in their various swimming and basketball competitions.

White has been with St. Julian since 1992 working at the Paw Paw tasting room, before moving into the warehouse where he was ultimately named Warehouse manager. He most recently served as Director of Operations before this latest promotion. His responsibilities include inventory control, purchasing, scheduling and overseeing the warehouse, as well as managing the winery’s private label products and co-pack customers as part of the specialty services division. White lives in Paw Paw with his wife and three children. An avid sports fan and soccer coach, he admittedly loves the outdoors and, of course, St. Julian wine.

“Success in any organization depends on having a skilled and talented staff,” says John Braganini, St. Julian President. “Joel and Matt are valuable assets to our company, and I am proud to have them as officers and directors.”